Xcel Energy has voluntarily created a solar rewards program in Minnesota. This reward pays it's customers a large sum of money to help offset the cost of installing solar. In exchange Xcel takes ownership of the Renewable Energy Credits - a bi-product of generating renewable energy. It is a huge incentive and truly brings the upfront investment down to a manageable amount. But what is Xcel doing elsewhere?

The following article was posted on Renewable Energy world yesterday.

The immediate result is that sales activity in Xcel’s customer-sited PV market has come to a grinding halt. Xcel Energy’s Solar*Rewards program will not accept new project applications until the Colorado Public Utilities Commission (CPUC) addresses the issue.  Unfortunately, Xcel’s actions parallel those taken by Colorado’s other IOU and second largest utility, Black Hills Energy, which took similar actions last October that have effectively killed its portion of the state’s PV market.  In the meantime, until this issue is resolved by the CPUC, local solar companies only have previously-approved projects, if any, to sustain them while the future of Colorado’s solar industry and customer-sited PV market hangs in the balance.

Prior to the unexpected announcement, incentive levels for the Xcel Energy Solar*Rewards program had been set according to capacity-based tiers that Xcel published – and updated daily – on its website (see snapshot below -- more info in sidebar at end of the article).  Modeled after the California Solar Initiative (CSI), the capacity-based tiers were established in 2009 with the intention of providing a road map of how the solar incentives would decline over time, thereby providing critically important transparency and visibility. 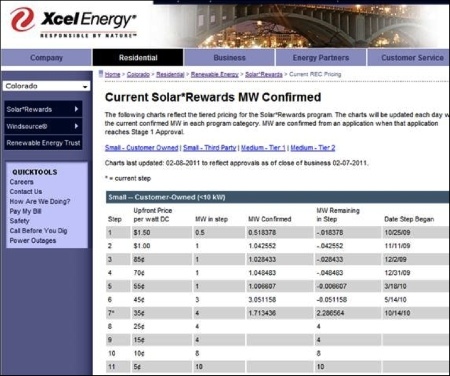 Solar companies used this information to plan their business operations and communicate to potential solar customers.  Last Wednesday, Xcel Energy detoured from this road map with their unexpected, unilateral announcement.  It was equivalent to immediately skipping over the remaining five steps that collectively represented over 36 MW in just one of the four Solar*Rewards incentive categories (first table in sidebar below).

Why is Xcel Energy doing this?  In its press release, it claims that, “The changes are prompted by the decline in solar panel costs and increasing subsidization from government programs. Together, these developments have reduced the level of Xcel Energy incentives needed to support customer participation in Solar*Rewards.”  Indeed, solar panel costs have declined over 50% in the past 2-3 years, but it’s unclear what government programs Xcel is referring to that are increasing their subsidization.

Either way, the decreasing cost of installing solar has allowed the incentive levels to be reduced proportionately over the same time period, in keeping with the program’s original outline.  As future cost reductions were realized, the capacity-based tiers should have allowed for a smooth transition, allowing demand and cost reductions to drive the decrease in incentives.  Demand would only be sustained if costs continued to decline – that’s part of the beauty of such a system – so it’s unclear why Xcel Energy felt the need to accelerate the incentive reductions and ignore their own previous road map to the detriment of the local solar industry.

Xcel Energy’s actions threaten to reverse the progress that Colorado has made since the Solar*Rewards program was launched five years ago as a result of a voter-approved Renewable Energy Standard (RES).  Colorado’s RES is one of the best in the country (30% by 2020) and Colorado has been among the top five PV markets in the U.S. for many years.  Since its launch in 2006, the Solar*Rewards program helped create over 5,300 local solar jobs at over 400+ companies that have collectively installed more than 70 MW of customer-sited PV systems (see graph below). 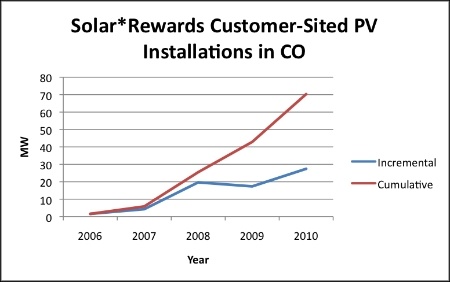 If Xcel’s actions are approved by the CPUC, I predict that over 50-75% of these jobs will be lost by the end of this year, causing Colorado to lose valuable solar industry infrastructure that took five years to build.

According to the press release, Xcel Energy predicts that over 59 MW of PV systems will be installed in 2011.  Despite the information provided, it’s difficult to discern how much of this is customer-sited and how much is utility-scale.  For example, the 59 MW likely contains a single 30+ MW utility-scale PV project in southern Colorado that SunPower and Iberdrola have been contracted to install.  Xcel seems to claim that the existing backlog of approved, but not-yet-installed, customer-sited projects totals over 6 MW and that over 10 MW of customer-sited solar will be sold in 2011, but I personally don’t see how that can happen at their proposed incentive levels.

This unilateral move by Xcel Energy is a departure from the expectations of Colorado’s voters, explicit in 2004’s voter-approved ballot initiative, in which they states that the RES and solar incentive program should contribute to building a sustainable solar industry in Colorado. Businesses depend on transparent, stable, long-term policies to make hiring and investment decisions, and this move undermines the previously-established capacity-based tiers that Xcel Energy created and obtained approval for from the CPUC.

With the national and international spotlight that President Obama put on the Colorado solar marketplace in 2008 (when he signed the historic American Recovery and Reinvestment Act at the site of a 100 kW PV system in Denver), this is an embarrassment to our state that might spoil Colorado’s “New Energy Economy” success story.  Xcel’s regrettable and surprising act demonstrates the urgent need for a reformed incentive program that will help build a sustainable solar industry, and in Colorado’s case, I strongly believe that this requires that the incentive program be independent from Xcel Energy’s and Black Hills Energy’s control.

The solar industry will be organizing a protest to Xcel Energy’s actions on the steps of the state capital in Denver next Friday, February 25, at 12:00 p.m.  Please join us there to express your support. This is not just about Colorado – it’s also about stopping a national precedent from being set by two Colorado utilities that have pulled the plug on a growing solar industry.  For more information or to get involved, please contact the Colorado Solar Energy Industries Association (CoSEIA) at www.coseia.org.

More info at this link.

Snapshots of three of the four incentive categories

Snapshot of the just the tiers: