GreenHomesforSale.com is a great website to look for solar arrays that have been beautifully integrated into a home's design.  Like these solar dream homes, All Energy Solar can create a custom solar design for you that will be a source of reliable and sustainable generation of electricity, and another reason to be proud of your home.  Call us for more details on your custom design and for a free solar quote, or find inspiring ideas at our photo gallery.

END_OF_DOCUMENT_TOKEN_TO_BE_REPLACED

Considering the Climate When Designing Your Home

Opportunities for incorporating sustainable energy in modern construction and design are endless.  In light of rising prices of fossil fuels and the deteriorating climate, the renewable energy movement is unavoidable, and the globe is catching on.  Teams of environmentalists across the world participating in the 2014 Solar Decathlon Europe have been working for eighteen months on stunning sustainable home designs, competing in categories of architecture, engineering and construction, energy efficiency, communication and social awareness, urban design, transportation and affordability, and finally, overall sustainability.  Read more about each amazing house on the design innovations blog, inhabitat.

END_OF_DOCUMENT_TOKEN_TO_BE_REPLACED 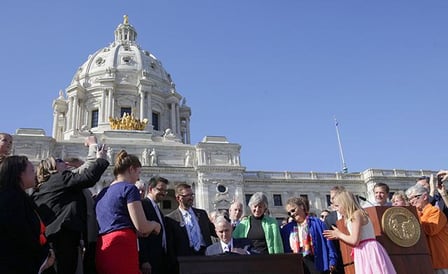 Thank you to the Minnesota Legislature and Gov. Dayton for passing the bill that will add 450 MW of clean energy to Minnesota's grid by 2020! This 1.5% Solar Standard is a huge leap forward for the solar industry and the environment in Minnesota! The goal is to generate 10% of the state's energy from solar by 2030, and this is a great step in that direction.

END_OF_DOCUMENT_TOKEN_TO_BE_REPLACED

Join All Energy Solar for Earth Day in Red Wing

With the recent attention Frac Sand Mining has received in Red Wing, citizens have taken an increased interest in their town’s valuable energy resources.

Specifically, citizens are keenly aware of the multitude of options available to them today that have all the benefits of mining without the environmental price tag, specifically solar.

END_OF_DOCUMENT_TOKEN_TO_BE_REPLACED

Don't Miss out on SRECs in Massachusetts

The New England Patriots are far from economically insolvent as a team, yet the Massachusetts’ solar industry still made more money installing solar panels than the team in 2012.  In fact, Massachusetts was named the sixth top solar state for 2012 by the Solar Energy Industry Association with 128.9 megawatts installed - enough energy to power 32,000 homes.

As a result of increased MA solar demand, new systems brought online after October 28th of this year will only be able to sell their Solar Renewable Energy Certificates (SREC) for 8 years instead of 10.  This means that if you sign up to get solar installed after October 18th of this year you’re losing out this years rebate. The upfront rebates are not going to be renewed for next year.

END_OF_DOCUMENT_TOKEN_TO_BE_REPLACED

10 Percent Solar Carve Out in Minnesota

This is great news for all Minnesotans! The Minnesota Senate and house dropped the percentage of Minnesota energy that must come from solar, but they moved up the timeline to 2020. This means that over the next 6 and a half years Minnesota will have 450 MW of solar installed.

END_OF_DOCUMENT_TOKEN_TO_BE_REPLACED

It has been a busy fall here at All Energy Solar! In addition to finishing up work from the summer, and being super relieved that we still have jobs after the election, we're running three different Solar Seminars this month - Minneapolis, Northfield, and Northampton. We're working really hard to get geared up for next year, because the rebates are pretty great, but they're not going to last very long. So if you've been thinking about solar at all, now is the time to act. Join us at one of these free seminars, and see what solar is all about. We guarantee you that you'll like what you see.

END_OF_DOCUMENT_TOKEN_TO_BE_REPLACED

What President Clinton Wants You to Know About American Solar Power

This article originally appeared on the Huffington Post: http://huff.to/PEyi5Z