Why Solar Power is the New Standard Source of Electricity

With the increasing affordability of solar panels and numerous other incentives to go solar, property owners across the states can no longer avoid solar power as an option for their electricity generation. It’s amazing that we’ve been running on coal power for the past century instead of the natural, inexhaustible resources of the earth. Solar is no longer a trend or an experiment; it is the cleanest, most practical source of energy out there. Today, there are so many reasons to commit to going solar, and here are the top 5.

1. The sun is a free, independent, and endless source of energy.
Solar power is a rapidly growing industry. According to the Solar Energy Industries Association (SEIA), in 2013, there was a 41 percent increase in photovoltaic (PV) capacity compared to 2012. Even places known for being cloudy have begun to turn to solar power for a clean source of electricity. Seattle is no cloudier than Germany, the world leader in solar powered homes. No matter where you go--the sun’s energy is what makes the globe turn. It is the most abundant and accessible source of energy in the world.

2. Affordability
There is an ongoing trend in the solar industry where every year installations become more affordable and higher quality. SEIA states the average price of a PV solar system has dropped by more than 50% since 2010. With flexible financing options and incentives like net-metering, tax credits, and rebates, solar panels are a smart purchase. Some property owners are candidates to pay little to zero down when installing solar with All Energy Solar.

Check out our Xcel Solar*Rewards blog post for information on one of the best solar incentives yet in Minnesota, and call us for more details on our financing options. After your initial purchase of your solar installation, you will own your own channel to free, endless energy from the sun. 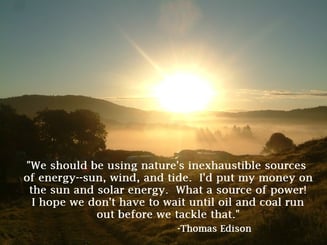 3. The climate it is a’changing
We’ve all seen the helpless polar bears and parched wastelands in California. Going solar is just one way to start living mutually with the climate. The EPA’s Clean Power Plan addresses the many risks of continuing to use fossil fuels, and sends a clear message that the U.S. is making serious plans to improve the health of the environment. The plan aims to cut carbon pollution from power plants across the country by 30 percent from 2005 levels--power plants are a main source of carbon pollution in the country, responsible for about a third of domestic greenhouse gas emissions.

Take a look at the EPA's map indicating the states and utilities that are making commitments to help meet nationwide standards to cut carbon pollution.  SEIA's infographic on 2013's Top 10 Solar States reveals some unexpected solar all-stars (number 3--who would have thought?).

4. The Economy
Now that solar power is cheap enough, it can compete with fossil fuels. For corporations, solar means business, and the bigger the business, the better the energy savings. The Solar Energy Industries Association’s has ranked the Top 20 Corporate Solar Users according to number of megawatts installed. What do these commercial giants all have in common? Smart investments in solar power. Imagine, the many Walmarts of the world run by free, renewable energy. These corporations will save huge amounts of money on energy costs in the long run.

5. Installing solar is easy, especially with All Energy Solar

With our free site assessments, you’ll be able to make an informed decision on whether now is the best time for you to purchase a solar installation. Check out our Case Studies page to see how our solar arrays have benefited local homeowners and businesses.

The conclusion is pretty simple: solar power is an unavoidable energy source. Solar is renewable, fossil fuels are not. Solar is becoming more efficient and cheaper everyday. Call us today or request a free quote to start on the path to free, clean, and limitless energy from the sun.