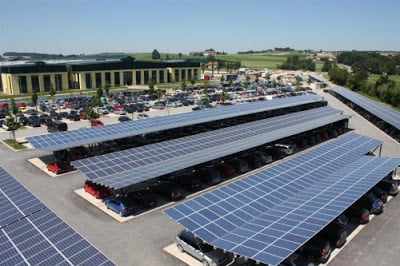 While fossil fuel companies in the U.S. are busily wrecking vast sections of the country’s natural heritage, a new energy resource has been quietly emerging from an unlikely source: parking lots.  More parking lots are being converted into solar energy farms that create clean, renewable power while also creating more green jobs in solar cell manufacturing, installation, and sales.


One relatively new player in the U.S. solar parking lot field is EEPro, an offshoot of the German company EEPro GmbH, which started up operations in North Carolina last year. Its main product consists of photovoltaic units mounted on steel frames, which dovetails neatly with support for renewable energy by the United Steelworkers and other labor groups that see a rich trove of new green jobs in the emerging green economy.


The basic idea behind a solar parking lot is simply to incorporate solar panels into a carport, which is basically an open-sided shed with a roof.  Solar carports can be small enough to fit a single car at a residence, or scaled up for commercial and institutional purposes. The main benefit, of course, is to generate renewable energy that can be used to lower utility costs on site, for example at a mall or office complex.  Depending on the scale, the installation could also yield excess energy in the form of electricity for sale.  A solar carport can also help reduce the “heat island” effect of parking lots and contribute to a cooler community, and by providing protection from the elements it can help enhance vehicle lifespan.


The solar parking lot phenomenon also dovetails with a major ramping up of the EPA’s efforts to reclaim brownfields for alternative energy and green jobs.  Like parking lots, brownfields are large patches of land (former industrial sites with varying degrees of contamination) that have already been paved over or otherwise altered by human activity, so it makes sense to put them to work at generating clean energy.  It’s a safer, less riskier alternative to harvesting fuel from productive land or marine ecosystems that could be used for other purposes such as food supply, recreation, and nature conservation.