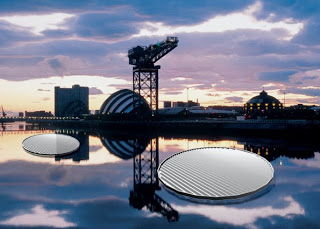 Aesthetic. Original. Functional. Who knew solar panels could make a statement?
Apparently Peter Richardson knew when he submitted a winning design for "solar lilies" to the International Design Awards. His idea is to turn disused water ways into functional space by populating them with solar panels shaped like water lilies. Aiming to increase quality of life, while generating energy, the lilies so impressed the Glasgow City Council that they expressed interest in developing a pilot project.
In cities all over the world there are disused water ways, canals and rivers.Often they become the focus for regeneration and for most people offer an improved quality of life and environment. Our project proposes to stimulate river activity and change by proposing that the surface is used to harness the power of Solar energy on a large scale. The energy created can be easily transformed and exported to the grid and will reduce the carbon footprint of the city. The idea references large lilypads that are optimised for efficient photosynthesis, so the design is inspired by nature. They can be moved and dismantled and are simply tethered to the river bed, integrated motors can rotate the discs so their orientation to the sun is maximised throughout the day.
In other words, no new technology required, just some clever design. My concern would be recreational or commercial river traffic (how “disused”must the waterway be?). Would waves from wake disrupt the solar lilies? What about an impact on wildlife or wildlife’s impact on the panels? What if the river ices over in the winter? One hopes a pilot project would figure out the kinks.
What do readers think – would a product like this in your local water way make an impact on your community?