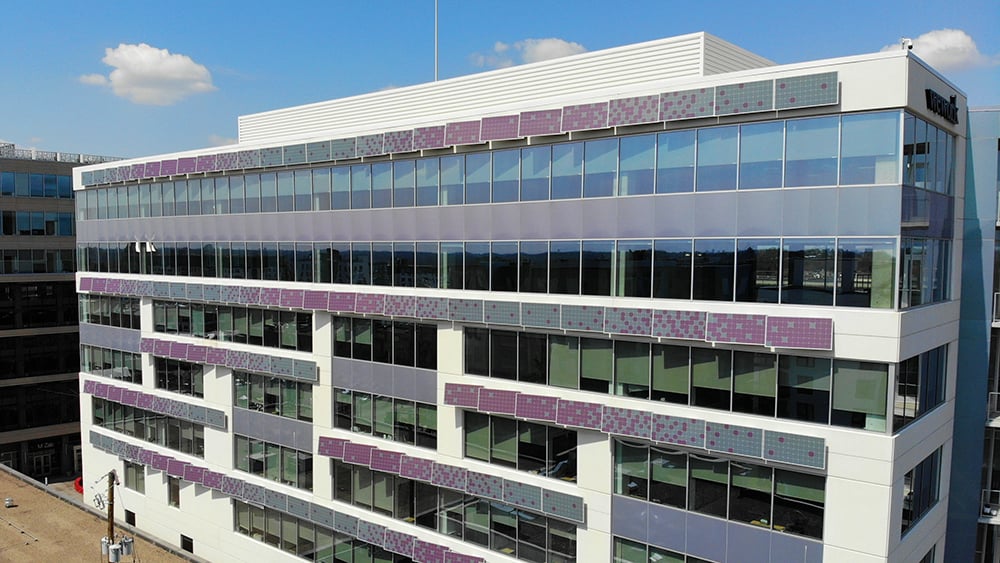 Wavy ribbons of tilted panels, each colored in checkerboard patterns of gray and purple, run the length of the MoZaic East building between rows of office windows. The result recalls circuit boards or the bold and boxy work of Dutch artist Piet Mondrain.

"It's safe to say (MoZaic East) is the world's first of its kind — there hasn't been another façade solar that involves using multiple colors and designs and these multiple offset angles," said Sistine Solar CEO Senthil Balasubramanian, whose company created the "SolarSkin" product that coats the panels in colorful designs.

The 43-kilowatt project came together after the building's developer, the Ackerberg Group, received a grant from the regional Twin Cities planning organization, the Metropolitan Council. The guidelines called for a "highly visible urban solar demonstration," said Mike Munson, Ackerberg's development manager. The company considered placing solar on the side of one of its properties but decided to go a step farther and "make this project artful because this is such a beautiful building," he said.

Read the full story on the Star Tribune website: https://www.startribune.com/minneapolis-solar-installation-mixing-art-and-clean-energy/572325321/

You can also ready more about the MoZaic East building in the Case Study we published: https://www.allenergysolar.com/blog/case-study/mozaic-east-functional-art-solar-project-uptown-minneapolis/