Made in Minnesota Solar Panels are Here!

Silicon Energy is opening its doors in Mountain Iron, Minnesota.  Things are taking off here in Minnesota for solar!  Check it out: 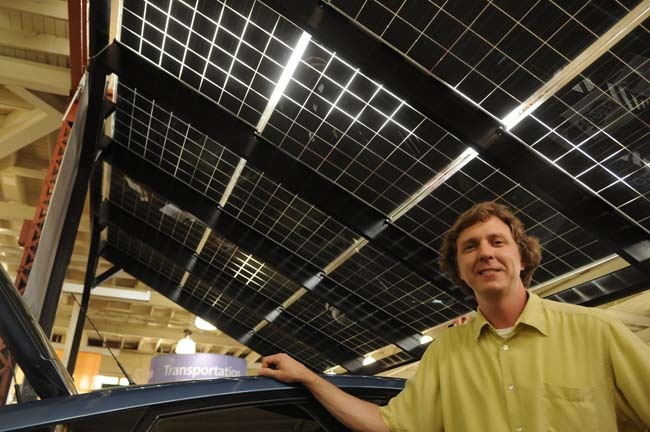 Silicon Energy's solar panels can be used as an awning, as displayed at this year s Minnesota State Fair. (Pioneer Press: Scott Takushi)

If you're looking for evidence of why solar electric panel manufacturer Silicon Energy built a factory in Minnesota, a state known more for snow than sun, Roland Ring-Jarvi could be Exhibit A.

"I've got a cabin and a home, and I'm thinking about solar for both," the 62-year-old retired teacher from Anoka said as he stopped by the Silicon Energy exhibit at the Minnesota State Fair's Eco-Experience building last Friday. His home was designed for solar panels, he said, but he didn't have the money to install them when it was built.

"I like that (the company's) from Mountain Iron, too," he added, especially because his cabin is near the Iron Range home of the company's new 26,000-square-foot factory.

"We've got 15 employees now," Silicon Energy's president, Gary Shaver, told him. The plant plans to hold its grand opening in September. The company plans to expand employment to 25 workers by the end of the year, Shaver said.

Silicon Energy is Minnesota's second and newest solar panel manufacturer, and along with an explosion of other solar energy exhibits, it's getting a lot of looks at the Fair. The new company's presence could be a signal that Minnesota, already a leader in using renewable wind energy, might be ready to embrace solar energy, too.

TenKsolar, founded in 2008 in Bloomington, is the state's first maker of photo-voltaic solar panels. It has received accolades for developing technology that potentially could lower the cost of solar-produced

electricity to 8 cents a kilowatt hour, or about the same as for conventionally produced power.

But its panels are designed for flat roofs and are used primarily on commercial buildings. The company promises to unveil a residential solar product next year, according to its State Fair display.

Silicon Energy, which got its start four years ago in Marysville, Wash., is focused on the home market. Its glass-paneled modules can withstand a person jumping on them - and, by extension, punishing winter snows, Shaver said.

The systems have other touches, such as no exposed wires that can be chewed on by squirrels or chipmunks, that Silicon Energy hopes will appeal to homeowners.

Choosing Minnesota for Silicon Energy's second factory was not a stretch, Shaver insisted.

"There's actually a surprising amount of interest in solar energy here, especially in the Twin Cities," he said from his perch at the State Fair, where he was interrupted by a steady stream of curious fairgoers.

Solar energy enthusiasts have long maintained that Minnesota gets as much sunshine as parts of Florida. But there are sober economic reasons for Silicon Energy's decision.

The company chose to build its $10 million facility in Mountain Iron, a town of 3,000 people 68 miles northwest of Duluth. The area is desperate for manufacturing jobs and willing to underwrite them.

The Iron Range Resource and Rehabilitation Board loaned Silicon Energy $1.5 million, payable over 15 years at 3.5 percent interest, to get going, said Gary Cerkvenik, a lobbyist from the area hired by Silicon Energy.

The Legislature also established a state rebate fund this year, called the Minnesota Bonus, that can help cover up to 60 percent of the installation cost of a system, provided it is made in Minnesota.

Xcel Energy, the state's largest utility, has its own rebate program called Solar Rewards that also would fund up to 60 percent of a system no matter where it was manufactured and could be combined with the Minnesota Bonus.

Combined, the two programs still could not rebate more than 60 percent of a system, but they've proved highly popular: The Solar Rewards program's entire $4.6 million fund was fully subscribed as of Aug. 19, its manager John Wold said, though more money will become available next year.

"As a company, we're very excited," said Susannah Pedigo, Xcel's renewable energy products and services manager. "It's an indication of the level of interest in Minnesota for solar."

The Minnesota Bonus, which also is administered by Xcel, still has about $3 million available, but some solar system installers were concerned that commercial projects may reserve the allocations before homeowners can get their hands on them.

Solar electricity systems aren't cheap. The Silicon Energy system on display at the Fair, mounted over a carport, for instance, costs between $18,000 and $24,000 to install. But Shaver said a system that size would cut a homeowner's electricity bills in half and pay for itself in five to seven years.

Most residential solar electric panels are manufactured in China or by multinational companies, Shaver said. His panels cost more but are durable, passing winter tests at the National Renewable Laboratory in Golden, Colo., he said.

He'll need a lot of customers like Ring-Jarvi to make the Mountain Iron expansion pay off.

"I like your design. I really like your concept. Durability is a factor," Ring-Jarvi said. And now that he's retired, he said he's got the time to finish off his house.

See the article from its origin here