As solar energy continues to progress and make strides toward being utilized to its full potential there is a lot of talk about when solar energy will reach the fabled grid-parity marker.

For those who are unaware, grid-parity is the point at which electricity generated from unsubsidized solar installations costs the same as energy produced from traditional forms of energy such as coal, oil, and natural gas purchased from the grid.

Solar reached grid parity in Australia in 2011 and in 102 other countries by the end of 2012. Solar is already competitive with fossil fuels in India, Hawaii, Italy, and Spain with many other countries expected to follow by 2020 as solar PV prices drop another 50%.

However, grid-parity calculations leave out environmental factors in most, if not all cases.

In 1997, Robert Costanza even attempted to put an economic value on the global ecosystem and concluded that the yearly value of nature to humans in economic terms was between 16 and 54 trillion dollars.

The value provided to humans from nature is immeasurable in economic terms, though. Nature is truly priceless, in the purest sense of the word. Without nature we would not be able to survive and without us there would be no economy to measure the value of nature.

So once the high environmental costs incurred from fossil fuels are factored in, solar is already at grid parity. Additionally, fossil fuels are currently heavily subsidized to bring their cost down. The high actual price of fossil fuels combined with their negative impact on the environment make solar energy’s price point much lower.

For those who still aren’t convinced, though, solar will reach grid parity soon enough, even without environmental costs factored in. 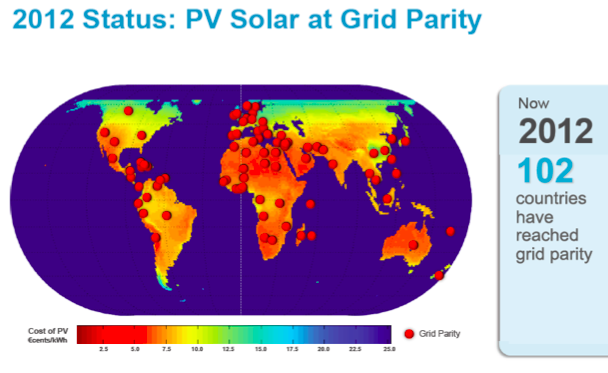