A Glimpse Into the Future of Transportation

Imagine if all the energy utilities in the world got rid of their fossil fuel powered cars, and replaced them with electric hybrid cars. They would save huge amounts on fuel costs and prevent countless pounds of carbon dioxide from infiltrating the polluted environment. It just so happens that Pacific Gas and Electric Company (PG&E) and other utilities have begun a revolution in commercial transportation. PG&E’s electric hybrid drive train Class 5 work trucks save fuel and have batteries that can be used to power the grid when electricity outages occur. 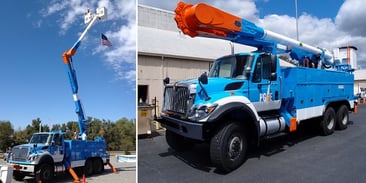 Electric Vehicles International (EVI) worked with PG&E to come up with the utility trucks run by Plug-In Hybrid Electric Vehicle (PHEV) technology. The grid-connected trucks can run on electricity for 45 miles, save up to 30 percent in fuel costs during hybrid mode, and have longer useful lives compared to conventional trucks. PG&E came up with an estimation that each truck could reach annual fuel savings of $7,000 in comparison to standard trucks--reaching a total of $3.5 million in fuel cost savings. PG&E is the nation’s largest fleet of alternatively fueled vehicles with 14 percent of the company’s fleet plugged into the grid. According to PG&E, the industry will invest 5% of their fleet in plug-in technologies, or about $1 billion in the next year.

The vehicles are more than just fuel savers. They are traveling micro-grids, and replace gas-guzzling generators that have to be hauled to sites. The electrified fleets can power the grid during an emergency, but can also power outdoor events and off-grid construction. “Think of a 3 day camping trip where you have unlimited power with the car you drive into the woods with,” says the former vice chairman of GM, Bob Lutz. These mobile reserves of electricity provide everything a community needs during an outage. 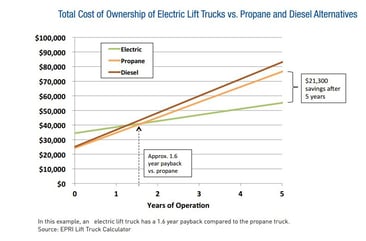 Edison Electric Institute’s paper, “Transportation Electrification-Utility Fleets Leading the Charge”, argues utility companies need infrastructure investment, and electrified fleets are investments that support the environment, decrease operating costs, ensure the future of our existing electricity grid, reduce dependence on imported oil, and create jobs domestically. The movement to plug-in fleets needs investment from other utilities like PG&E in order to survive and grow, but facts such as the graph above prove plug-in technology is a smart investment for companies with large fleets of vehicles.

The hybrid vehicles are plugged into the grid and charged while they’re not being used, and not only store energy, but transfer the energy directly to where its needed. The cars are still quite expensive, but with every day they become more affordable. No matter the price, if the transportation sector invested in plug-in technology like PG&E and went even further by plugging the cars into solar panels instead of coal-powered grids, the country’s main mode of transportation would be run by the free, clean, and renewable energy provided by the sun.